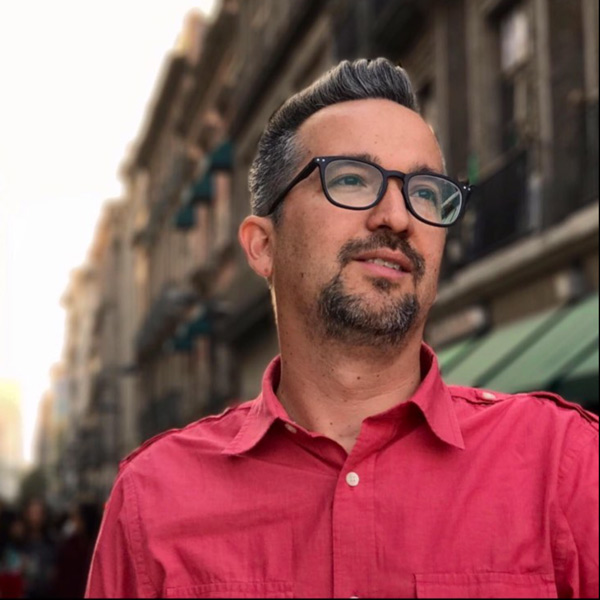 Frank Coronado is a Mexican photographer that lives and works in Oaxaca, Mexico. In 1998 he obtained his Bachelor degree in graphic design from “Universidad Iberoamericana” in Puebla, Mexico, where he specialized in analog and digital photography.

He also studied with renowned photographer Mary Ellen Mark, in 2012 and, at hat time, he started working on “Divino pretexto” (Divine excuse) a documentary photography project on which he visited different villages close to Oaxaca City looking to portrait local catholic feasts and show the way the people use to celebrate according to their traditions and showcase the cultural diversity of his hometown to the world.

Currently, he works on different projects. In 2015, he initiated a project of intervened landscapes: “Usted no esta aquí”. For such project, he has photographed evocative landscapes in ten countries, including Mexico. He has participated in many solo and collective exhibitions in Spain, Portugal, United Stated, UK, Ireland, Japan, Peru, Colombia, Philippines, Singapore and different states within Mexico. He has collaborated with magazines such as Vogue USA, Mexico and Latin America and National Geographic Traveller.

He presents “Oaxaca, Rhythms and Beliefs” at the Umcebo Gallery from March 19 to April 19, 2019, describing the traditions and celebrations of a very particular blend of pre-Hispanic roots and well-preserved Catholic religiosity, and that still have the capacity to bring towns together.

Frank Coronado illustrates this picturesque setting with a powerful black and white series. (Only the scenes at the cemetery are in color, illuminated by the brightness of the candles). A choice that gives intensity, but also a certain solemnity to scenes yet very colorful.
This relative seriousness contrasts with the agitation that prevails, because the ceremony is anything but sad, and all noises reflected through images. Fanfare music and sparkling firecrackers, rhythmic movements with a brass band, ceremony bells on costumes, everything evokes pleasure and cheerfulness, but Coronado likes to cover his tracks by unexpected framing.
Similarly, the singularity of some scenes in the margins parades with characters out of their festive environment are somehow surreal.
Particular attention is to be paid to the eyes, sometimes grasped through a mask or under a thick make-up, always deep, and which seem to question the spectator on its credulity.

Frank Coronado also took part in February 2018 in Umcebo Gallery’s “ « Setting space in Time » group show  in partnership with La Valise, with the series: “Usted no esta aquí” – You are not here

“Usted no esta aquí “- You are not here

As human beings -strictly organic and rational- we can sense quite quickly the things/events? that happen around us, some of us make a pause to have a closer look into the details and pay attention into the relation that makes a place or a moment to turn it into an emotional memory, strong enough, that we will keep it in our minds and make it last long.

Today, a large group of people, we tend to represent our memories through photographs. I got the idea of working with an element that we can easily recognize and find very often while traveling anywhere: that is the red dot that points out a geographical location on a map. This red dot is the binding resource that links my intention to capture those moments that once you think of them will take you to a series of memories and emotions. This is how this project was created, a mix of graphic and emotional work with intervened landscapes trying to show the way we give a sense of belonging to those places we visit and we retain mentally as memories even when we are not there anymore but we feel like we own them.

I named this project “You are not here” as a way to recall those places with a sensorial, physical and emotional connection, there are not people on the images only the red dot that allow us remember a place only by it emotional value and not for who was there, those are very personal instants when we remember the place for what it is and what we lived there.

“You are not here” is also an invitation to connect with those images to activate the sensations and by this way help the viewer to remember his own emotions through the memories that take him to the sites that he enjoyed and mentally appropriate.