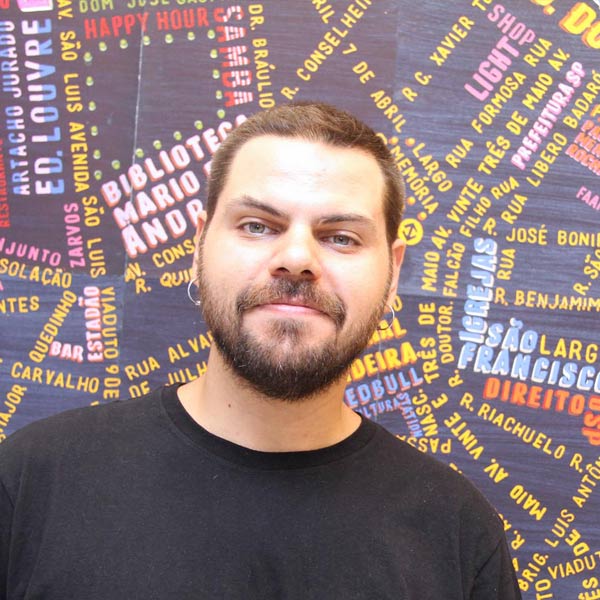 Azeite de Leos is an artist, illustrator and educator, born in São Paulo.

He graduated in visual arts at FAAP (Fundação Armando Álvares Penteado) and has a master in Visual Poetics from FASM (Faculdade Santa Marcelina). He joined the artistic Residency Program of Cité Internationale des Arts in Paris (2017). He participated to several exhibitions, individuals and group shows, as in Centro Cultural São Paulo, MUBE (Brazilian Museum of Scupture), Jaqueline Martins Gallery, among others. He has worked in the educational sectors of museums and temporary exhibitions, such as SESC-SP, MAB-FAAP, the Image and Sound Museum (MIS), Itaú Cultural, as well as supervisor and tutor of the distance- learning course for professors in contemporary art offered by the Biennial Foundation of São Paulo.

The relations between drawing and writing are the basis of his artistic research, as well as his plastic production is focused on the processes of impression and image construction.

Azeite de Leos is one of three artists of “Setting space in Time” group show at Umcebo gallery with La Valise. On this occasion, he presents two series:

“Daily Narratives” In the series “Daily Narratives” (Paris 2017), using the idea of ​​narrative, I made drawings that join the photographic recordings of cracks and stains of the walls with some fragments of monotypes previously made. The images obtained through digital photographs have been edited and added to the “scanned” images of my monotypes. This idea of ​​the fragmentation of the work and the manipulation of photographic documents of the walls joined the characteristics of the lines and the spots in the design of monotypes, which tries to generate new graphical possibilities to compose new drawings.

“Without Title” (Paris / São Paulo 2017) The photographic documents work as a kind of notebook of my daily experiences. The selected photographic documents include in their character the contents of the passage of time and memory. The lines, the spots, the words and the writing superimposed on these photographic documents through the monotype emphasize the overlapping of my daily stories and my reflections on these daily experiences. These are overlays of my drifts, my walks, built from my findings and losses. Through the drawing, and consequently the writing, it’s built also a thought: visual signs are developed from a thought about the world. Drawing is a way of thinking and it depends on the experience, the repertoire and the critical sense to create. The interest of recording these signs, formed by the clues of the passage of time and bearing in their material memory, this obvious mark, is an occurrence of the perception and the gaze of my daily experiences. In the drawings that I realize, the overlap of materiality, gestures and movements on the photos, are an expression of the stories created. These stories of relations also reflect on the questions that the conception itself brings: these intrinsic relations between the image and the writing, this narrative logic that leads the thoughts, the facts of report and stories.