Marc Dumas lives and works in Paris since 1977, where he trained in visual communication at the Ecole Nationale Supérieure des Arts Décoratifs. When he met the Brazilian Lucia Guanaesn he made his first trip to Brazil, where he visited São Paulo, Rio, Salvador, the colonial towns of Minas Gerais, Brasilia, Fortaleza, Recife and Belém. 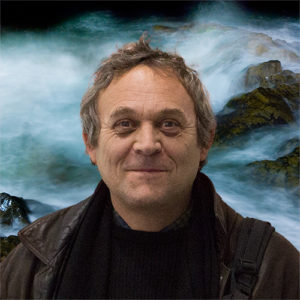 In 1981, after graduation, he joined the famous collective Grapus that he left in 1983 to create Tout pour Plaire, specializing in cultural communication, the workshop has since collaborated with the most prestigious French institutions: the Ministry of Culture, the Center Georges Pompidou, the Parc de la Villette, the Cité de la Musique and the Center des Monuments Nationaux, among others .

His recent works are: Travel around my table, a series presenting the objects of his close environment whose symbolic significance expresses his relation to the world; Porto da Barra series, where, directly from “the most exceptional city beach in Brazil”, he studies the horizon, the regular visitors, and the movements of the sea; Cargos and Ikaros carried out in Salvador; and finally São Paulo of all the shadows realized in collaboration with Lucia Guanaes and Diógenes Moura.

Since 2001, Salvador de Bahia is his second home.

At gallery Umcebo:
In 2017, Marc Dumas has contributed to collective exhibition “Experiencities”
In 2018, he has presented (solo exhibition)  “Reburbain, fragments of a city”
In 2020, he presents (solo exhibition): “In this garden, the paradise”