Lucia Guanaes was born in São Paulo, Brazil. Following the 1964 coup d’état which established a military dictatorship in the country, her father had to exile in France, while her family stayed in Brazil. At the age of 22, after a three-year experience as a graphic designer in a major national daily in São Paulo, and two years at the Faculty of Communication at the University of São Paulo, Lucia left Brazil to settle in France. 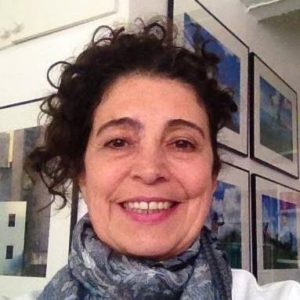 As soon as she completed school, Lucia dedicated herself to photography in a passionate way. In 1986, she returned to Brazil after almost 10 years and realized Brasil-Brésil, published in 1989 to Editions Marval. Between 1996 and 1999 she directed the CD-Rom Au cœur de Bahia in Salvador’s historic center, which received in 2000 the Grand Prix Möbius Latin America and the Special Prize of the Jury for the Prix Möbius International.

With one foot in Brazil, Lucia then realizes Transfigurations, about the phenomenon of cross-dressing in the carnival of Bahia, Paranapiacaba on the village of the same name, Borders of the sea on the urban space in the coastal cities and Popular on different faces of Brazilian popular culture. In 2013, she published in collaboration with Marc Dumas the book São Paulo of all the shadows that brings together images taken from the windows of 11 hotels of the city center of São Paulo.

Lucia Guanaes has contributed to “Experiencities” presented in 2017 at gallery Umcebo.
She has also presented a solo Exhibition “No Mundo” (In this world) in November 2019.